Angelica archangelica
Angelica is an important Shamanic plant among the Saami people of the Far North.
In Native American herbalism it is refered to as a “Bear Medicine”.  Just as the bear goes into hibernation through the winter , bear medicine usually relax the mind, open the imagination and bring people into dreamtime. Angelica certainly has this capacity.
Bears eats these roots upon awakening  in spring to wake up, clear their throat and start rebuilding their mass. 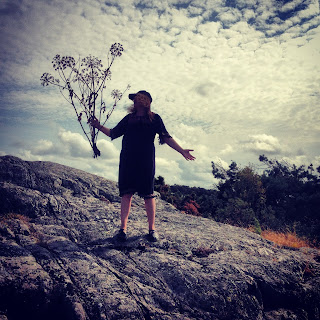 Angelica has many medicinal properties.  A most impressive Angelica-therapy is the treatment of swellings, inflammations and  glandular indurations, particularly of the head and neck region.
It is good for anguish, spasms, nervous excitation and fatigue ; calms excess in both the sympathetic and parasympathetic branches of the autonomic.
It is good for arthritis and gout as well as muscular cramps, spasms and epilepsy.
Very good for the liver, increases digestion and metabolism of oil and production of bile, secretion of bile , hence increases  disgestion and nutrition. 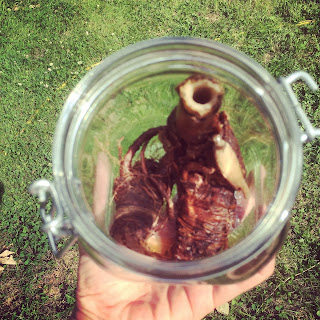 I see Angelica as an embodiment of  the Alchemical device “As above so below” . The deep aromatic root and the umbrella-like flower full of starlike seeds  are connected through a hollow stem , a channel connecting the heaven and the earth. This is one of the effects the Spagyric Tincture may have upon you – making you feel like this channel.
Looking at the root from a different angle, it is light and airy. In fact, it contains pockets of air. It grows in damp conditions. Thus it aerates or brings air into the watery realm. It makes fluids more active and breaks up concentration of water , phlegm and blood. It promotes peripheral circulation , and opens up the lungs. It relaxes the throat and makes it easier to take long deep breaths. It simultaneously opens the imagination and the mind. Angelica aligns you to walk with your guardian angel.

Angelica is traditionally considered a solar plant. I connect it both to the sun (warming,) and also to Mercury (aromatic, volatile oil, lungs, respiration, the channel between the above and below, as Mercury  is the mediator and messenger between these two worlds) 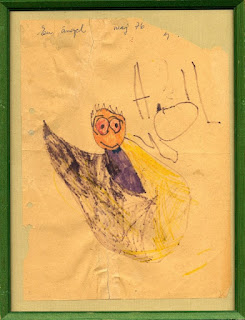 "Angelica aligns you to walk with your guardian angel" A drawing of an angel by the founder of Alchemilla Apothecary when she was almost 4 years old. 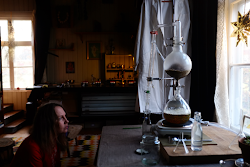